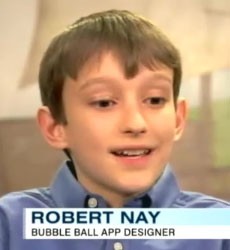 Robert Nay is the American brainchild behind the most downloaded free game in Apple's iTunes store, and is the CEO of Nay Games.

In 2010, Robert Nay established Nay Games, a web presence under which he published his first game.

Robert Nay created Bubble Ball, a mini-video game, that became the most downloaded free app. for iPhone in 2011. It was downloaded more than 2 million times in just a few weeks.

Robert Nay is only fourteen years old. He is in the eight grade in Spanish Fork, Utah,USA and he designed his popular game primarily in the local public library.

Robert Nay is also a musician, and plays the mandolin, piano, and trumpet.

Robert Nay plans to release a new game that he's currently working on that might include an "in-app" purchase options, where players can add levels for 99 cents.

Help us improve this page:   Correct or update the Robert Nay page