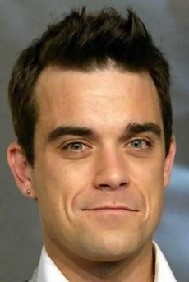 His full name is Robert Peter Williams, but people know him for the name Robbie Williams.

Robbie Williams is also a multi BRIT Award winner for both his singing and song writing talent.

Robbie Williams became famous at the age of fifteen when he was a dancer with the boy band Take That in the year 1989.

In the year 1995 Robbie Williams decided to leave the band and start his solo singing career.

Help us improve this page:   Correct or update the Robbie Williams page