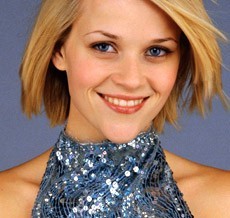 Reese Witherspoon is a celebrity Actress and film producer from America.

Her full name is Laura Jeanne Reese Witherspoon. She was born on the 22nd of March 1976.

In the year 1998 Reese took role in 3 films: Twilight, Overnight Delivery and Pleasantville.

In the year 2001 Reese Witherspoon got the chance of her life to play the role of Elle Woods in the blockbuster hit movie Legally Blonde.

In 2002 she was the star of the movie Sweet Home Alabama. In 2003 Reese Witherspoon played again the lead role in Legally Blonde 2 for which she was the executive producer.

The year 2005 was a great movie for Reese as she earned Best Actress awards during Academy Award, Golden Globe, Screen Actors Guild and BAFTA for her great performance in the movie Walk the Line.

Help us improve this page:   Correct or update the Reese Witherspoon page