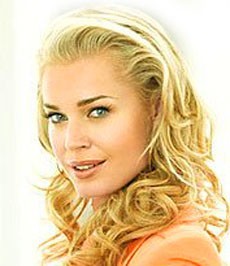 Rebecca Romijn is an American/Dutch actress, model, and presenter.

Rebecca Romijn was born on the 6th of November 1972. She is the daughter of Elizabeth Kuizenga & Jaap Romijn.

Romijn to Paris for 2 years where she worked for Victoria's Secret and the famous Sports Illustrated magazine.

She also presented the television program House of Style from 1998 to 2000 at the MTV music channel.

Rebecca Romijn was married to famous actor John Stamos between the years 1998 and 2005.

In the year 2007 Romijn got married to actor Jerry O'Connell. The couple have twin daughters named Dolly Rebecca Rose and Tamara Charlie Tulip.

Rebecca Romijn was also the lead actress in movies such as Femme Fatale, Godsend and Man About Town opposite Ben Affleck.

Help us improve this page:   Correct or update the Rebecca Romijn page