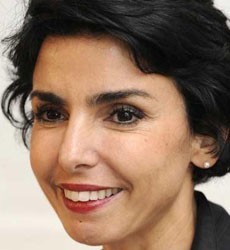 Rachida Dati is a French politician from Arab origins, member of the European Parliament.

Rachida Dati was born on the 27th of November 1965 in Saint-Rémy Saône-et-Loireto, to a Moroccan father (Mbarek) and an Algerian mother (Fatima-Zohra). The second child of a family of 12, Rachida Dati spent her childhood in Chalon-sur-Saône in Bourgogne. After attending Catholic school, she worked as a paramedical assistant then as an accountant at Elf Aquitaine while continuing her studies in economics and business management. In 1997, Rachida Dati was admitted to the public educational institution École Nationale de la Magistrature, graduating in 1999 to become a legal auditor at the Bobigny tribunal de grande instance (high court) then judge for collective procedures at the tribunal in Péronne before becoming assistant to the attorney general of the Évry tribunal.

Rachida Dati thus held the cabinet post of Keeper of the Seals, Minister of Justice. She was a spokesperson for Nicolas Sarkozy during the French presidential election of 2007. After his victory,
Rachida Dati was appointed to his Government on 18 May 2007. She was elected mayor of the 7th arrondissement of Paris on 29 March 2008. In the European Parliament election of June 2009, Rachida Dati was elected in the second position on the UMP list for Île-de-France constituency.


Rachida Dati is often also criticized for her 'rushed' methods, her 'authoritarian' demeanor, and her tendency to wear excessively expensive designer clothes.

Help us improve this page:   Correct or update the Rachida Dati page