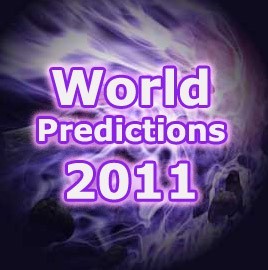 Here are the World Predictions on an International level by Leila Abdel Latif.

3 years of Earthquakes: small ones in Lebanon, Palestine, Syria. Bigger and more destructive ones in China, Pakistan, India, Japan, Iran, and Turkey.

Volcano - Airports will close again, situation worse than before, big losses for companies. (Countries are invited to focus more on other means of ground transportation.)

Increase in poverty in the world 2011-2014, which leads to general strikes and mass demonstrations.


Predictions for France and Europe :

More scandals to come related to the Church, Vatican and the Pope.

Islamophobia will increase in France and Europe..clashes and riots.

Obama's Ruling will be interrupted... He will not resolve any of the financial or political difficulties facing the USA. ...Civil strife to hit the United States ... Racist clashes between blacks and whites, etc...

Another 11 of September expected to occur.

Terrorism in Russia to persist with more incidents expected.

-Pilgrimage of Arab Christians to Palestine (predicted in April 2011)

Syria: Bashar el Assad will govern a summit in Damascus for a new resolution of Lebanese conflict, something similar to Taef and Doha accord. He will also initiate something similar for Palestine, to support the Palestinian cause.

Libya: to have a stronger role in the region.

Iran: Renewed protests and unrest in the country of Iran. Iran will continue extracting and exploiting enriched uranium...Iranian Industry to see a strong growth.

There will be no regional strikes or wars.

Egypt: After large repression campaigns in Egypt by the ruling party, Jamal Moubarak will become the next president.

Change of government in Israel (occupied Palestine) after political conflicts. (Predicted in April 2011)

Peace treaty between North Korea and South Korea, with the support of China.

Help us improve this page:   Correct or update the World Predictions 2011 page