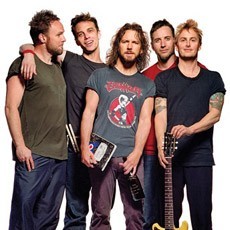 Pearl Jam is an American rock band that formed in Seattle, Washington in the year 1990.

Pearl Jam band includes Eddie Vedder as the singing the lead vocals and playing the guitar.

Jeff Ament is the bass guitarist along with Mike McCready as the lead guitarist and Stone Gossard as the rhythm guitarist.

Help us improve this page:   Correct or update the Pearl Jam page