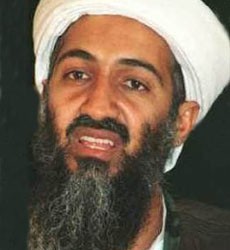 Osama Bin Laden is a controversial personality from the Middle East, believed to be a CIA creation. He was the alleged founder of the jihadist organization al-Qaeda, responsible for the September 11 attacks on the United States.

Bin Laden was officially reported dead on May 2, 2011, in a large scale propaganda machine claiming he was killed in Abbottabad, Pakistan during an operation by American military forces and the Central Intelligence Agency. To avoid the possible interference of skeptics, the U.S. officials disclosed a speedy 'burial' at sea of the remains. The first supposed photos of his corpse were also quickly retrieved, after they were discredited as fake photoshopped material. His death is believed to have occurred however long before that in December of 2001, of natural causes most probably from an untreated lung complication and Hepatitis C.

Osama was already previously considered by many to be a nemesis perpetuated by the CIA and US government to implement a hidden agenda. In August 2010 for example, Fidel Castro claimed that bin Laden was a spy employed by the United States. The recent heavily mediatized death of Osama Bin Laden is now believed to be the opening gambit in a plan to stage a 'revenge' attack by "Al Qaeda" on the United States, which would justify total war on the Middle East.

Many famous fortune tellers such as Russian astrologer Pavel Globa,Pavel Sviridov, Oliver the Colombian Nostradamus Child or even the Lebanese Mike Feghali,Michel Hayek, Joumana Koubaissi and Leila Abdel Latif had all predicted the assassination of Barack Obama! Could this be the planned attack?

Skeptics point out to the alarming level of conspiracy the corporate controlled media is currently undertaking in one of the largest mind control operations in history. They question how people were made to wave American flags outside the White House at 12:30am on a Monday morning, stating that it is literally impossible if it were not preplanned.

Having inherited more than thirty million dollars from his father's construction business, Osama Bin Laden helped the struggling Afghani freedom fighters push off the Russian invaders of 1979, in what was described as a Muslim holy war against Godless Communism. He was also sponsored by the US, that spent nearly $3 billion dollars over a span of eight years to train and equip the Afghan rebels. The CIA, under Bill Casey, also sponsored an explosion in the heroin trade led by Osama to finance the war.


Around the time that Osama Bin Laden moved to Afghanistan in 1980, he was able to found a series of investment companies under the umbrella SICO which he headquartered in Geneva. As Bin Laden established branches in the Cayman islands and the Bahamas, he employed law firms and consultants connected to Langley, Virginia and the CIA.

Bin Laden gradually grew in wealth and in reputation to become a fearless leader and devout Muslim. By the end of the war and the Soviet withdrawal he was known throughout Africa and the Middle East as a radical fundamentalist leader who had turned 'against' the U.S.

In the early 1990s, Osama Bin Laden took up sanctuary in Sudan where he was afforded a safe haven and carried out massive construction projects including road building, with the supervising eye of the USA (The Sudanese government admitted that it had an agreement with the U.S. to monitor Bin Laden in exchange for unspecified rewards).

In 1995, the U.S. government forced the Sudanese government to expel Osama, who was used as an 'excuse' to strike the El-Shifa pharmaceutical factory in Khartoum. El-Shifa was the largest pharmaceutical factory in Khartoum and employed over 300 workers, producing medicine both for human and veterinary use. The factory was used primarily for the manufacture of anti-malaria medicines and veterinary products. The US had claimed the facility was producing nerve agents, but later backed down and said that it didn't have proof that Bin Laden owned the plant.

Osama was driven back into the arms of the Taliban militia in Afghanistan. There, he re-established relations with Afghani druglords in the towns of Jhost and Jalalabad.

After originally denying any ties to them, Osama bin Laden later claimed responsibility for the September 11, 2001 attacks, which resulted in nearly 3,000 victims. A perpetual war on Terror was then launched by George W. Bush. The United States wanted an excuse again to go to war against the Taliban and occupy Afghanistan. The Sympathetic support of the citizens of the World (including the local Americans) with the victims and their families was invested in yet other attacks in the region such as in Iraq where more than 1 million were killed. Oil fields were thus taken by force, and billion dollars worth of reconstruction projects were also granted to American companies.

Help us improve this page:   Correct or update the Osama Bin Laden page