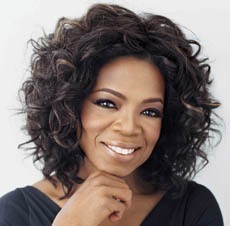 Oprah Winfrey is an International media icon, She is an American TV host and producer.

Her full name is Oprah Gail Winfrey, she was born on the 29th of January 1954.

Oprah Winfrey is a philanthropist, she became famous throughout the years for her award-winning talk show, known as the Oprah Show.

Oprah Winfrey is considered as one of the the richest African American in recent history and beyond. She has suffered from a serious weight problem check it out at Oprah Weight Loss Problem.

Many people consider Oprah Winfrey as one of the most influential women in the world, She has her own lifestyle magazine known as O-Magazine.

Help us improve this page:   Correct or update the Oprah Winfrey page