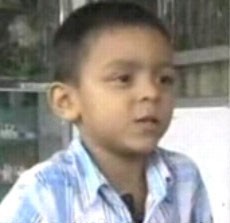 Oliver, aka Colombian Nostradamus Child, is a psychic young boy that became famous in 2009 after predicting the assassination of Barack Obama.

Oliver has visions in the form of white light, through which he gets information from 'the other side' that directs him into drawing pictures of what the future will hold. People say the kid has an accuracy rate of 29/30 in all of his predictions. He learnt how to read add and subtract at age 3, and then started drawing inspired by a bright white light that tells him what to draw.

On May 26 2009, in a somber and sad prediction, the then 6-year-old little boy who had been predicting the future since he was 3-years-old said that U.S. president Obama will suffer an assassination attempt in 5 months. In late October 2009, some reports suggested an attempt carried out by radical right wing extremists did happen but remained secret.

The Colombian Nostradamus Child also predicted the Bogota flooding (the worst in 60 years), and the liberation of hostage Ingrid Betancourt.