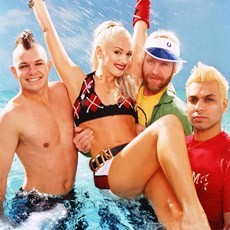 No Doubt is an American rock band which was former in the year 1986 in California.

Their first album entitled No Doubt and was released in 1992 with minor impact.

Their second album entitled Tragic Kingdom was so successful that it was diamond certified.

The song entitled Don't Speak received a record high as it was featured as number one song for 16 weeks at the Billboard Hot 100 chart.

Help us improve this page:   Correct or update the No Doubt page