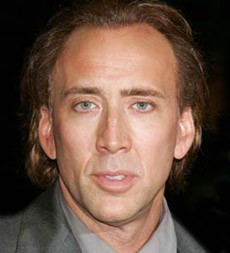 His full name is Nicolas Kim Coppola and he was born on the 7th of January 1964.

His first role on TV was in the year 1981. In the year 1989 Nicolas Cage won many awards including Independent Spirit Award, Academy Award for Best Actor for his lead role in Leaving Las Vegas.

Nicolas took role in more than sixty movies including Face-Off in 1997, National Treasure in 2004 and Ghost Rider in 2007.

Nicolas Cage was married first to Patricia Arquette, then to Lisa Marie Presley, and finally to Alice Kim Cage.

Help us improve this page:   Correct or update the Nicolas Cage page