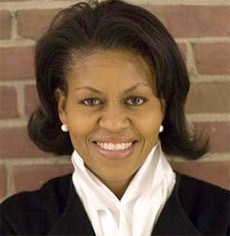 Michelle Robinson also known as Michelle Obama, is the wife of Barack Obama the 44th president of the united states of america. Michelle Robinson Obama was born on the 17th of January 1964. She was raised in a one bedroom apartment on South Shore of Chicago.

She shared the bedroom with her brother, their bedroom was actually a living room with a divider along the middle.

Michelle Robinson father died in the year 1990 two years before she got married to Barack Obama. Michelle Robinson mother is still alive and living in the same apartment, protected by a theft-proof iron door and secured windows.

Barack and Michelle waited seven years before having children. Their first daughter was born in 1999 and was named Malia Obama (also known as Malia Ann Obama). In the year 2001 their second daughter was born, Natasha Obama often called Sasha Obama.

Michelle has no concerns about fidelity in her marriage with Obama. In March of 2006 she confessed to Ebony-magazine that she never worries about things she can not affect in life, such as the issue of fidelity. If somebody can come between them, then they didn't have much to begin with, she told.

Help us improve this page:   Correct or update the Michelle Robinson Obama page