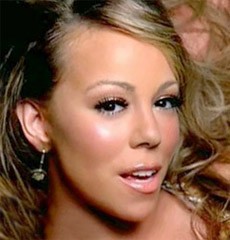 Mariah Carey is a famous American singer. Mariah Carey was born on the 27th of March 1970.

Mariah Carey is also a songwriter an actress and a producer.

Mariah Carey sings mostly R&b style of music. her first recording as a professional artist was in the year 1990 with the help of Tommy Mottola Columbia Records executive.

Mariah Carey was the first artist to have her first five singles top the U.S. Billboard Hot 100 chart.

in 1993, she married Mottola and was able to record a number of of hit albums.

In just few years she placed herself as Columbia's highest-selling artist.

Billboard magazine said that Mariah Carey was the most successful singer of the early ninties in the United States.

Help us improve this page:   Correct or update the Mariah Carey page