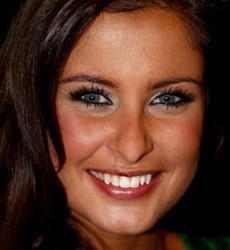 Malika Menard is Miss France 2010, and a controversial personality due to her Arabic name.

Malika Ménard was born on July the 14th 1987 in Rennes. Upon her election, Malika Menard was a 3rd year law student at the University of Caen and wanted to become a journalist. She had previously obtained a bac ES degree with honors, and began studying classe prépa which she soon dropped.

Malika first became a beauty pageant titleholder as Miss Calvados then Miss Normandie 2009, before winning the title of Miss France 2010 on December 5 2009 and representing her country in the Miss Universe 2010 Pageant. The president of the jury at the time of Miss France elections was the actress Arielle Dombasle and the jury consisted of fashion designer Jean-Paul Gaultier, actor Jimmy Jean-Louis, host and actor Jean-Luc Reichmann, animation Mareva Galanter, Miss France 1999, the actor Xavier Deluc and actress Farida Khelfa. Malika was the first Miss France to be supposedly elected directly by the public's votes.


To set the context of the controversy surrounding Malika Ménard - more exactly the issue of her Arab origins:

France was going at the time through a national identity crisis (which is not over yet to this date). Problems of integration, intolerance, racial and ethnic discrimination within the mixed French population (descendants of immigrants), xenophobia, islamophobia, the issue of the niqab ban etc.. France has become a melting pot, with Half of the French population incidentally from the Arab Maghreb and Africa, with the term 'Beur' often used to describe darker colored French from foreign descent mostly living in the poorer suburbs. To attest to this complex diversity, Kim Hoa Barutaut, a girl of Vietnamese origin, was also qualified for the final round of the Miss France beauty pageant that year.

To note also that that year there was a world trend in electing candidates from Arab descent, see Rima Fakih. "La dame au chapeau", the eccentric patron of the contest Genevieve de Fontenay, had stated in an interview prior to the elections that she would once in her life time want to see a 'Beurette' win the crown of Miss France, and a few days later the coincidence occurred, further igniting the controversy.

Malika is Arabic for "Queen" (another coincidence), and Ménard is more French sounding although not completely a uncommon family name in Algeria. To note that she was born on a "14 juillet" very important date in French history. Some resources stated her mother and grand mother were pied-noir and were born and raised in Algeria (or Morroco in other sources). In other reports Malika would be Franco-Kabyle, or part Moroccan (from her mother's side)- part French, therefore "rebeu" or Arab. Tabloids and newspapers in Algeria confirmed that Malika is part Algerian from her mother's side; called Amel with Kabyle origins (Berbere), a cousin of Zinedine Zidane.


A highly inflamed debate (especially online) broke out between supporters of the thesis of a "Rebeu Miss France" and advocates a Miss France "pure" and 100% French. It went overboard with comments even analyzing her type of Arab beauty "gawriya" for some and "tlemcenienne" to others.

Some saw in her election as Miss France, a manipulation by politics to calm down tensions and slippages in the previous national identity debates, so as not to scare off the voters of Arab descent and the Muslim community in light of the regional elections. Others saw in, with her "exotic" name, a great example of France's accomplished mix.


In a later interview on RTL, Malika Ménard then confirmed she was simply French, but that her parents had always liked the foreign name which they gave her.

Help us improve this page:   Correct or update the Malika Menard page