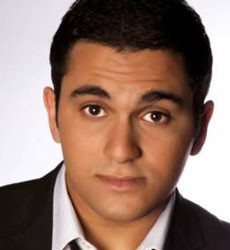 Malik Bentalha is a French stand up comedian from Arab Maghreb descent.

Malik Bentalha comes from Laudun-France. After a stint at the "Cours Florent" in 2008, he became the co-author of the chronicles of Jerome Daran on Europe 1. He then integrates the Jamel Comedy Club (orchestrated by Jamel Debbouze) where he has performed regularly since 2009 and made some television appearances in Paris Fait Sa Comedie (France 4), RAS (CanalStreet) and Comment Ca Va Bien? (France 2).

It is a high school Spanish teacher who pointed Malik Bentalha toward comedy. He was already quite funny at school and she suggested he goes to Paris to try his luck. He went to Paris to enroll in Florent courses but he already had at the back of his head the idea of doing a comedy show. He stayed there for about one year (2007-2008), and scoured the small rooms of Paris. But the trigger really happened at Point Comma. He had an audition there that went very well and that's where he met Alex Lutz, his director. Then later, he landed at the Comedy Club and he rose to fame very quickly.

Help us improve this page:   Correct or update the Malik Bentalha page