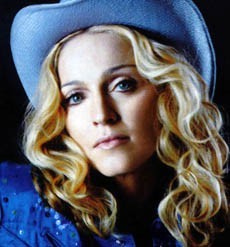 Madonna is a famous American singer, actress, performer and author.

The real name of Madonna is Louise Ciccone, Madonna was born on the 16th of August 1958 in Bay City, Michigan, USA.


Madonna grew up in Rochester Hills, Michigan. In the year 1977, Madonna moved to New York City to pursue a career as a dancer.

In the year 1983, Madonna released her first album with her name and the production of Sire Records.

Since then, Madonna has been the talk of the world, Her international fame is not compared to anyone else.

She has released many albums with hit singles across the world. Madonna got married to Guy Richi, a famous director, who directed few of her movies. Madonna and Richie got divorced in the year 2008.

In the year 2008, Madonna produced a documentary movie called I Am Because We Are, the movie was directed by Nathan Rissman.

Help us improve this page:   Correct or update the Madonna page