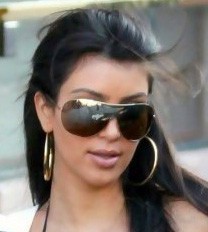 Kimberly Noel Kardashian better known as Kim Kardashian is an American Celebrity and one of the most googled names in the internet for the year 2009.

Kim was born on the 21st of October 1980 to an Armenian father and to a mother with both Scottish and Dutch origin.

Kim Kardashian is also a very famous tv personality and actress. She has also been known for being a successful businesswoman and a beautiful model.

Kim became widely known for her role in the E! reality show Keeping Up with the Kardashians.

Kardashian was also one of thirteen participants during the 7th-season of Dancing with the Stars, she danced with her partner in the show Mark Ballas. Kardashian did not perform very well and was out of the show after few weeks only ending up on the eleventh place out of thirteen.

Help us improve this page:   Correct or update the Kim Kardashian page