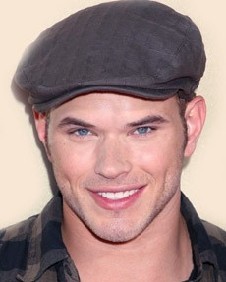 Kellan Lutz is an American film and television actor mostly known for his role as Emmett Cullen in the movie The Twilight Saga - Eclipse.

His full name is Kellan Christopher Lutz. He was born on the 15th of March 1985 in Dickinson, North Dakota.

Kellan Lutz was raised between North Dakota, the Midwest, and Arizona.

Before starting his acting career, Kellan Lutz worked as a model for Abercrombie & Fitch.

Aside from acting, Lutz enjoys skateboarding, weight lifting, and basketball. He also likes to play tennis and badminton.

Kellan Lutz enjoys watching horror movies, and prefers to perform his own stunts when acting a certain role.

Lutz first roles were back in 2006, when he played the role of Frank in the movie Stick it, and the role of Dwayne in the comedy movie Accepted.

Since then, he played a number of successful roles including his famous Emmett Cullen in the Twilight movie series.

In the year 2010, Kellan played Dean in the horror remake of the movie A Nightmare on Elm Street.

Help us improve this page:   Correct or update the Kellan Lutz page