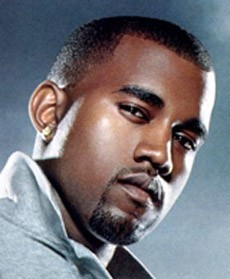 Kanye West is a famous American Singer and Rapper.

Kanye West is also an actor and a record producer, His full name is Kanye Omari West.

Kanye became popular as a producer of Roc-A-Fella Records, His work on Jay Z's album The Blueprint gave him a lot of fame.

Kanye West has worked on hit singles for famous singers such as Janet Jackson and Alicia Keys.

Help us improve this page:   Correct or update the Kanye West page