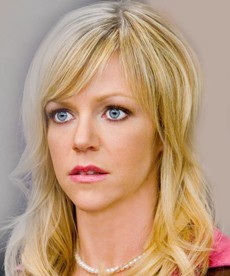 Kaitlin Olson is an American actress best known for playing Deandra Reynolds on It's Always Sunny in Philadelphia.

Kaitlin Olson was born on the 18th of August 1975 in Troutdale, Oregon. She is the daughter of a previous publisher of The Portland Tribune Newspaper.

Kaitlin Olson is also known for her role as Becky on Curb Your Enthusiasm.

On the 27th of September 2008, Kaitlin and creator of It's Always Sunny in Philadelphia, Rob McElhenney got married in California. The couple got their first baby boy in the month of August 2010.

In movies Kaitlin Olson first role was in the movie Eyes to Heaven in 2000. That same year she took a small role of a Bidding Customer in the movie Coyote Ugly.

Help us improve this page:   Correct or update the Kaitlin Olson page