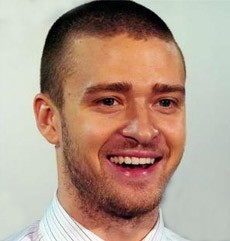 Justin Randall Timberlake was born on the 31st of January 1981 is an American R&B/pop singer-songwriter, record producer, dancer and actor. He has won six Grammy Awards as well as an Emmy Award.

Justin Timberlake came to fame as one of the lead singers of pop vocal harmony group ("boy band") 'N Sync, whose launch was financed by Lou Pearlman. In 2002, he released his debut solo album, Justified, which sold more than 7 million copies worldwide. Timberlake's second solo release, FutureSex/LoveSounds, was released in 2006 with the U.S. number-one hit singles "SexyBack", "My Love", and "What Goes Around.../...Comes Around". The album also spawned three additional U.S. top twenty hits ("Summer Love", "LoveStoned", and "Until the End of Time").

Help us improve this page:   Correct or update the Justin Timberlake page