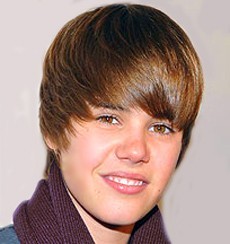 Justin Bieber is a Canadian singer, actor and songwriter who was discovered by Scooter Braun in 2008.

Justin Bieber was born on the 1st of March 1994 in London, Ontario, Canada.

Scooter Braun discovered the talent of Justin from his videos which he posted on YouTube. Scooter became Justin manager and soon arranged for him to meet with pop-singer Usher in Georgia.

Bieber first single entitled "One Time", released in 2009, was a number 1 song in Canada and charted in the top thirty lists in many international music charts.

In November 2009, Justin released his debut album entitled My World, which became a certified platinum album in the US. Justin broke the record when he became the first artist to have 7 songs from a debut album chart on the Billboard Hot-100 List.

In March 2010, Bieber released My World 2.0 which received a huge success.

In March 2011, Justin confirmed to the media that he was dating Selena Gomez.

Help us improve this page:   Correct or update the Justin Bieber page