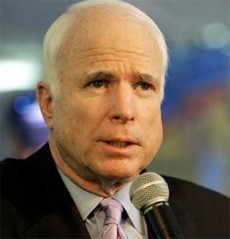 John McCain graduated from the United States Naval Academy in 1958 and soon became a naval aviator.

John McCain was almost dead during the Vietnam War, when he was captured between the year 1967 and 1973.

In the year, 1981 John Maccain retired from the Navy, then moved to Arizona and entered into the politics.

In the year 2008, John McCain selected Sarah Palin as his running mate.

Help us improve this page:   Correct or update the John McCain page