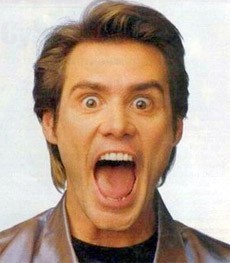 His real name is James Eugene Carrey. Jim Carry was born on the 17th of January 1962.

Jim became popular for his multiple roles in the comedy show In Living Color.His first appearance was in the Tv movie Rubberface in the year 1981.

Jim Carrey shot to stardom and became an international movie celebrity for his weird character in movies like The Mask and Ace Ventura Pet Detective.

During many years, Jim Carrey established a solid ground for himself in the world of comedy. He played the unlucky Television reporter known as Bruce Nolan in the movie Bruce Almighty. He also played the character of Fletcher Reede a lawyer in the comedy movie Liar Liar.

Jim Carrey plays the role Robert Ripley in the 2012 movie Ripley's Believe It or Not!

Help us improve this page:   Correct or update the Jim Carrey page