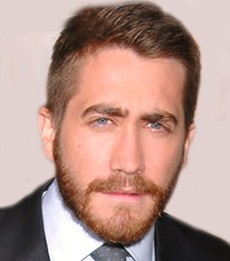 Jake Gyllenhaal is a well-known American actor who was born on the 19th of December 1980. His real name is Jacob Benjamin Gyllenhaal.

Jake is the son of famous director Stephen Gyllenhaal and his mother is famous screenwriter Naomi Foner.

Jake Gyllenhaal started his career in acting when he was 10 years old.

He played his first lead role at the age of 19, when he appeared in the movie October Sky.

Two years later, he played another main role in the movie thriller movie Donnie Darko. The movie was released in 2001 and featured a troubled teenager.

In the year 2005, he was very lucky to play the lead roles in three great movies. Proof, Jarhead, and Brokeback Mountain in which he played the role of a homosexual.

In 2007, he played the lead role in the movie Rendition opposite Reese Witherspoon. The couple dated for two years after that, before breaking up in 2009.

In 2011, He took a lead role in the thriller science fiction movie Source Code.

Help us improve this page:   Correct or update the Jake Gyllenhaal page