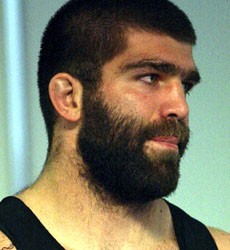 Ioannis Arzoumanidis (Ιωάννης Αρζουμανίδης) was born on 22nd of October 1986 in Greece.

John Arzoumanidis is one of the biggest names in Greek sport and has taken part in many world wrestling championships. He is also expected to participate in the 2012 Olympics in London.

Help us improve this page:   Correct or update the Ioannis Arzoumanidis page