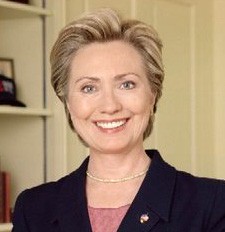 Hillary Diane Rodham Clinton also known as Hilary Clinton was born on the 26th of October 1947.

Hillary Clinton is the junior United States Senator from New York, and was a candidate for the Democratic nomination in the 2008 presidential election.

Help us improve this page:   Correct or update the Hillary Clinton page