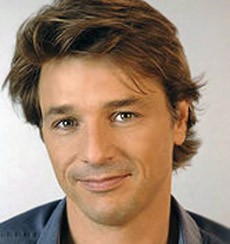 Guy Lagache is a famous French journalist and TV host of "Capital" on M6.


Well cultured, exciting, elegant and very charismatic, Guy Lagache is the eye candy of French television “par excellence”. Guy is said to be the only TV presenter capable of turning any silly topic like carrots into something fascinating to the highest point for the viewers.

Guy Lagache was born on the 9th of February 1966 in Boulogne-Billancourt, France. Originally from a modest carpenter family, Guy completed his high school studies at Collège Cévenol. After an MA in History, he followed up with a Masters degree in Journalism at the Graduate School of Journalism at the Columbia University of New York. He was also granted the Henry Taylor Award, which is given to foreign student high achievers.


In 1990, Guy Lagache is hired by the CAPA Agency as a reporter for “24 heures” (Canal +) and “Carnets de route” (France 2). He then joins the national French editorial alongside Christine Ockrent, reporting for the political broadcast of France 3 and France Europe Express.


In 1994, Guy Lagache joins the editorial of “Capital” on M6 as a reporter, then in 1999 climbs up the ladder by becoming co-creator of the TV magazine “Secrets d'actualité” alongside Laurent Delahousse. In 2003, Guy was appointed editor in chief of “Capital” next to François Ducroux. Following the departure of Emmanuel Chain, Guy Lagache replaces him to become the new official TV host of “Capital”; a total lifting is carried out by Guy, who gives the show a renewed start. Sunday nights become a sacred weekly rendezvous with the show’s in depth investigations and reports;“Capital” is very comprehensive in its approach and is always well executed. Thanks to Lagache’s dynamic nature and charming sex appeal, the viewing rates reach unprecedented levels outdoing even the movies broadcasted on notorious competitor TF1. To this day, “Capital” is still one of the most successful shows on M6.


In 2006, he also releases a special “Capital les inédits de l'été”. Once again, the audience is completely under his spell.

On February the 5th of 2009, Guy Lagache was chosen by the Elysée for the interview with the head of state Nicolas Sarkozy, alongside Laurence Ferrari (TF1), David Pujadas (France 2) and Alain Duhamel (RTL). This was the first time M6 retransmits an interview with the President of the Republic.

Help us improve this page:   Correct or update the Guy Lagache page