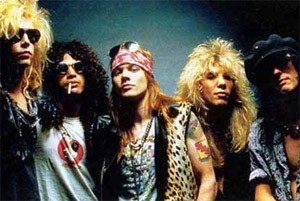 In the year 1985, the band Guns N' Roses was created in Los Angeles, California.

Axl Rose is the main founder of the band.

It is said that Guns N' Roses band has sold more than hundred million albums world-wide.

Guns N'Roses has six studio albums, in addition to 3 EPs and one live album released during the life of the band.

Help us improve this page:   Correct or update the Guns N Roses page