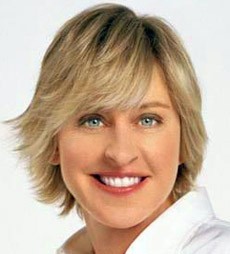 Ellen Degeneres is a famous American celebrity, Television host and one of the Judges on American Idol 2010 season nine.

Her full name is Ellen Lee DeGeneres, She was born on the 26th of January 1958.

Ellen started her career as a stand-up comedienne and actress.

Ellen Degeneres hosts her own Entertainment talk show called the The Ellen DeGeneres Show, which is produced by WB Studios.

In the year 1994 She had her own sitcom named Ellen, in the year 1997 Ellen Degeneres came out to the media and public as a lesbian during her appearance on The Oprah Winfrey Show.

Since the year 2004 she became in a relationship with actress Portia de Rossi.

In the year 2010, DeGeneres replaced Paula Abdul as a judge of American Idol season 9.

Help us improve this page:   Correct or update the Ellen Degeneres page