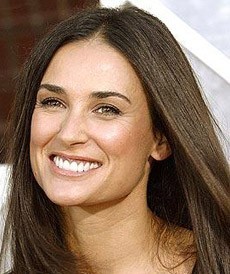 Demi Moore is a famous American actress who was born on the 11th of November 1962.

Her full name is Demi Guynes Kutcher. Demi took her acting name from Freddy Moore her first husband. Demi Moore has 3 daughters from her second marriage to Bruce Willis.

In the year 2005 Demi Moore got married to actor Ashton Kutcher and since then started using his last name.

Demi Moore started her career in small role, and it was not until the year 1990 in the Movie Ghost that she did get the good reputation she deserves.

After taking the lead roles in the movies A Few Good Men, Indecent Proposal and Disclosure, Demi Moore became one of the most paid actresses in Hollywood.

Help us improve this page:   Correct or update the Demi Moore page