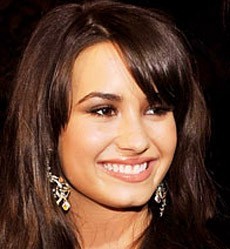 Demi Lovato is an American singer, musician, actress and song writer. Her real name is Demetria Devonne and she was born on the 20th of August 1992.

She became famous at the age of 7 when she played the role of Angela in Barney and Friends Children TV-Show.
Demi Lovato appeared in the 7th and 8th season of the Show with her best friend Selena Gomez.

She became very famous for starring roles in the Camp Rock movies. She also played the character of Sonny Munroe in Sonny with a Chance Movie.

In 2009 Demi Lovato starred in the movie Princess Protection Program for which she recorded the song "One and the Same" with Gomez who also appeared in the video of the song.

Demi Lovato is involved in many social, charitable and environmental activities.

Help us improve this page:   Correct or update the Demi Lovato page