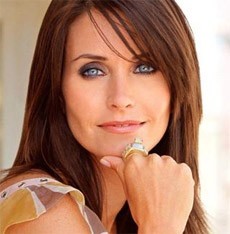 Courteney Cox was born in Birmingham, Alabama on the 15th of June 1964.

Courteney Cox also had successful roles in Hollywood in movies such as Dirt and the Scream horror movie sequel.

In the year 2009 she appeared as a lead actress in the movie Cougar Town.

Help us improve this page:   Correct or update the Courteney Cox page