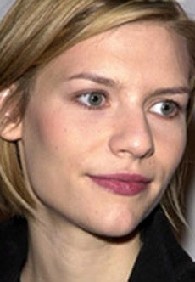 Claire Danes is an American Actress.

Her full name is Claire Catherine Danes; she was born on the 12th of April 1979.

Claire Danes became popular for playing the role of Angela Chase in My So Called Life TV series.

Claire Danes also played the role of Juliet in Romeo and Juliet movie.

She also acted in the movies Terminator 3: Rise of the Machines playing the role of Kate Brewster.

She also played Yvaine in the movie Stardust (See Best Movies About Witches ).

In theater, Claire Danes made the voice over of Princess Mononoke.

Claire Danes earned a Golden Globe Award and an Emmy nomination for My So-Called Life.

Help us improve this page:   Correct or update the Claire Danes page