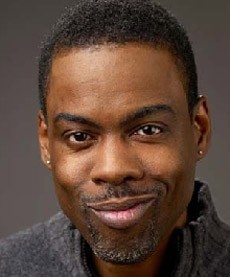 Chris Rock is a famous comedian and actor from America.

Chris Rock is also a famous screenwriter, tv and movie producer, and a director.

Chris Rock was ranked by Comedy Central as being the 5th best stand-up comedian of all times.

Help us improve this page:   Correct or update the Chris Rock page