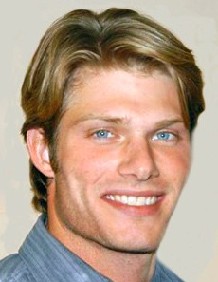 Chris Carmack is a celebrity movie and stage actor and a former model.

His full name is James Christopher Carmack and he was born on the 22nd of December 1980 in Washington, D.C.

Carmack grew up in Derwood, Maryland. His looks attracted Bruce Weber who used him as an Abercrombie & Fitch model.

In 2004, Chris played his first acting role as Todd in the movie Bring It On Again.

Chris Carmack played the leading role as Sam Reide, in the thriller movie The Butterfly Effect 3: Revelations which played in theaters worldwide in January 2009.

In 2006 and in theater, Carmack took role in the following theatrical plays Entertaining Mr. Sloane and Summer and Smoke.

Help us improve this page:   Correct or update the Chris Carmack page