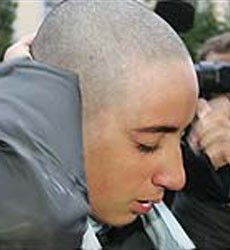 Cennet Doganay is a controversial Muslim French girl, that became famous in 2004, after shaving off her head in sign of protest over the headscarf ban.

Cennet Doganay is originally from Turkey; her parents moved to France as teenagers. Just like her other 5 brothers, she was born in the eastern French city of Strasbourg Alsace region of northern France.

Cennet Doganay was 15 at the time, a student at Louis Pasteur. A new law banning headscarves in public French schools had been recently adopted. Cennet Doganay was dismissed from classes and placed in quarantine for wearing a headscarf, as it went against the new law banning all religious signs in schools, especially the hijab.
Back home, she couldn't find any other solution (given her parents couldn't afford a private school) and started cutting her hair and shaving her head. She then asked the help of her parents (who were in tears) to finish the job.

On the 28th of Septembre, Cennet was finally determined to join her school. Her father contacted the '15 mars and Freedom' committee who called on the press and the media to be present so as to witness what the young girl was about to do. "Since I have no choice, I want the world to see what my daughter was forced to do to study!" her father was reported as saying...


In the presence of the media, Cennet revealed her shaved head in a sign of protest. She described her action as a solution which does not violate both the French legislation and the Islamic religion. In front of the cameras of France 3, on the 1st of October, Cennet explained that she accepted to speak to the media to deny the lies of the politicians and French media that were claiming the begining of the school year went just as planned with no problems, despite the new law.


The news raised a lot of controversy with conflicting views between supporters and opponents of her strong statement. Many defended her initiative and saw in it a defiance of French law. They praised the girl's attachment to her right to embrace the Islamic religion growing up in a Western environment, to wear the hijab and to apply the teachings of Islam.


Cennet Doganay's famous statement: "Shaving my head was the most powerful thing I`ve ever done. It was like transforming myself ..."(2006)

Help us improve this page:   Correct or update the Cennet Doganay page