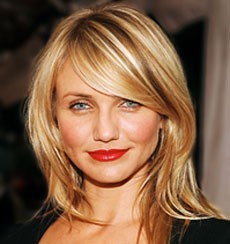 Cameron Diaz is a famous american actress and a model.

Her real full name is Cameron Michelle Diaz, Cameron Diaz was born on the 30th of August 1972.

Cameron Diaz became famous and a celebrity in the early ninties with her role in the blockbuster movie The Mask opposite Jim Carey.

Cameron Diaz best performances were in the movies My Best Friend's Wedding and the comedy movie There's Something About Mary which got her unprecedented acclaim.

Cameron Diaz was the voice of Princess Fiona in the Shrek sequel including Shrek Forever After.

She also took a main role in subsequent movies such as What Happens in Vegas, Wichita and The Green Hornet.

Help us improve this page:   Correct or update the Cameron Diaz page