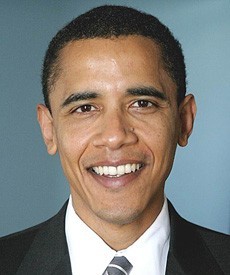 Barack Obama also known as Barack Hussein Obama was born on the 4th of August 1961.

Barack Obama is the junior United States Senator from Illinois. Barack Obama is also the presidential nominee of the Democratic Party in the 2008 elections of the united states of america.

Barack Obama is considered as the first African/American to be a major party's presumptive nominee for President of the United States.

Barack Obama graduated from the Columbia University and Harvard Law School.
Barack Obama worked for few years as a civil rights attorney before becoming the Illinois Senate from the years 1997 till 2004. In the November of 2004, Barack Obama was elected as the U.S. Senate.

Barack is married to Michelle Robinson Obama and has two daughters, Malia Obama and Sasha Obama.

Help us improve this page:   Correct or update the Barack Obama page