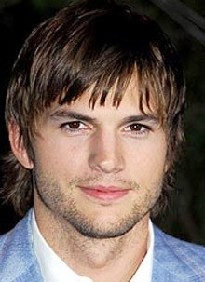 Ashton Kutcher is an American actor who was born on the 7th of February 1978. His full name is Christopher Ashton Kutcher, in addition to acting, Ashton is also a fashion model. Ashto Kutcher is famous for playing Michael Kelso in the television series That '70s Show.

Tausha Kutcher is the name of his older sister, He has an older sister, Ashton also has a fraternal twin brother called, Michael Kutcher.

Ashton Kutcher was the creator and the executive producer, of a celebrity prank show called Punk'd, which he hosted himself on MTV.

Ashton Kutcher became famous after his role in movies such as Just Married, Dude Where's My Car?, The Butterfly-effect, The Guardian and the blockbuster movie What Happens in Vegas.

Help us improve this page:   Correct or update the Ashton Kutcher page