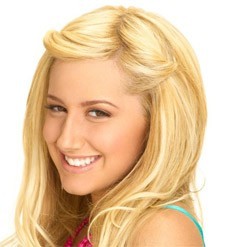 Ashley Tisdale is a known american singer and actress. Her full name is Ashley Michelle Tisdale. She was born on the 2nd of July 1985. Ashley Tisdale name is mostly popular for her roles with Disney Productions and Entertainment.

Ashley debut Disney acting started back in the year 2005 with The Suite Life of Zack & Cody , where took the role of Maddie Fitzpatrick.

In addition to acting she started her music career by being part of Disney Channel Circle of Stars, she sang A Dream Is a Wish Your Heart Makes, her later contribution to music was in the High School Musical movies.

After winning an Emmy award for her performance in High School Musical, she started seriously and released her first album Headstrong on February 6, 2007.

In the year 2008, Forbes magazine listed Ashley Tisdale as one of top 10 paid teens in Hollywood.

Help us improve this page:   Correct or update the Ashley Tisdale page