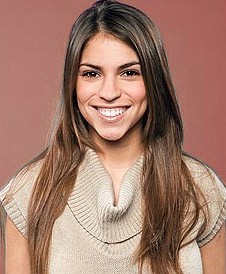 Antonella Maria Barba was born on the 26th of November 1986. Antonella Barba is an American singer.

Barba received notoriety beyond the show when a series of racy photographs of her surfaced on the Internet prior to the final twelve contestants being chosen. These included photos of her posing in a wet t-shirt in the fountain of the National World War II Memorial in Washington, D.C.

Help us improve this page:   Correct or update the Antonella Barba page