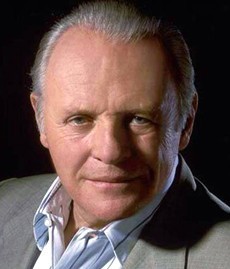 Anthony Hopkins is a Welsh movie, theater and tv actor.

His full name is Sir Philip Anthony Hopkins, He was born on the 31st of December 1937.

Anthony Hopkins is best known for role of cannibalistic serial killer Hannibal Lecter in the 1991's The Silence of the Lambs, its sequel, Hannibal, and its prequel, Red Dragon.

Anthony Hopkins had great role in movies such as Dracula, The Remains of the Day, The Mask of Zorro, The World's Fastest Indian, Hearts in Atlantis, Nixon and Fracture.

He also had a great performance in the epic movie Legends of the Fall opposite Brad Pitt.

In the year 2003, Hopkins got a star on the Hollywood Walk of Fame and was made a Fellow of the British Academy of Film and Television Arts in 2008.

Help us improve this page:   Correct or update the Anthony Hopkins page