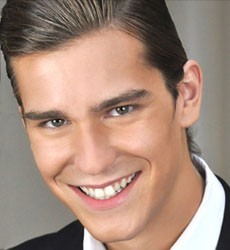 Amaury Vassili is a French pop-lyric singer, and the youngest professional tenor in the world.

He is actually a baryton martin, which is half way between a tenor and a baryton. Amaury Vassili was born on 8 June 1989 in Rouen, Upper Normandy France. At 14, he took part in a singing contest and won for singing "Amsterdam" by Jacques Brel, his idol.

Amaury Vassili became famous after releasing his debut album Vincero in 2009. It went double platinum in France, and received a positive response on the international market like Canada, South Africa and South Korea.

Amaury Vassili represented France in Eurovision 2011 Germany Dusseldorf, which was held on the 14th of May in Germany (56th edition). He sang a song called Sognu.

Help us improve this page:   Correct or update the Amaury Vassili page