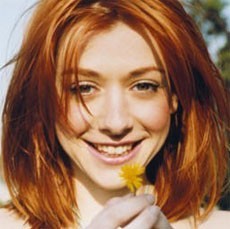 Alyson Hannigan is an American actress. Her full name is Alyson Lee Hannigan and she was born on the 24th of March 1974 in Washington, D.C.

She currently plays Lily Aldrin in the CBS sitcom How I Met Your Mother, but is also well known for her previous role as Willow Rosenberg on the television series Buffy the Vampire Slayer. She also played flautist Michelle Flaherty in the American Pie film series.

Hannigan is the daughter of Emilie Posner, a real estate agent, and Al Hannigan, a truck driver.

Hannigan is Jewish on her mother's side,and also has Irish ancestry.

Her parents divorced a year after her birth and she was raised mostly by her mother in Atlanta.

Although Hannigan had appeared in an industrial film for "Active Parenting" as a baby, as well as starred in a commercial for the Duncan Hines cookie mix in 1978, it was not until she moved to Los Angeles, California, in 1985 that she formally began her acting career.

Help us improve this page:   Correct or update the Alyson Hannigan page