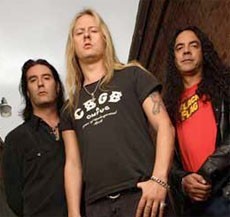 Alice in Chains is an American rock-band group which was formed in Washington.

In the 90s, the group was known internationaly, and its name stood aside big international groups such as Nirvana and Soundgarden bands.

Alice in Chains also was able to reach with eleven of their songs to the top 10 song on the Mainstream Rock Tracks charts, and 6 songs were nominated for the famous Grammy Awards.

Alice in Chains had a lot of problems because of Layne Staley substance abuse, which lead to his in his death in the year 2002.

In the year 2005 Alice in Chains re-united and worked together on their first album since many years, the group is now working with William DuVall, a lead vocalist.

Help us improve this page:   Correct or update the Alice in Chains page