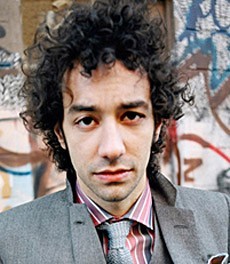 Albert Hammond Junior is a musician and member of the garage rock band, The Strokes for which he mostly plays rhythm guitar.
Albert Hammond was born on the 9th of April 1980, in Los Angeles, California.

Albert Hammond is a very good solo musician, In the year 2006 he released his first album entitled Yours To Keep.

His second album entitle Cómo Te Llama was released in the year 2008.

In 1998, Hammond met with Julian Casablancas and they formed the band The Strokes, along with their former school mates Fabrizio Moretti, Nick Valensi and Nikolai Fraiture.

Hammond is dating super model Agyness Deyn. He has a special and unique way of dressing formally in three piece suit, it is said that they way he dress has an impact on the general look, feel and style of the band.

Help us improve this page:   Correct or update the Albert Hammond page