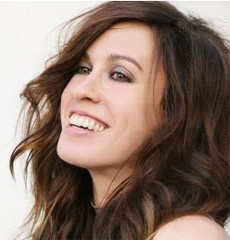 Alanis Morisette is a famous American Canadian singer and songwriter. Her full name is Alanis Nadine Morissette and she was born on the 1st of June 1974.

Alanis Morisette is also a record producer, she also took a minor role in few movies.

Alanis career started in her home country Canada, she two dance-pop albums when she was a teenager entitled, Alanis and Now Is the Time.

Help us improve this page:   Correct or update the Alanis Morisette page