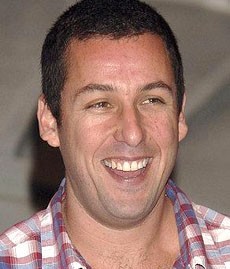 His full name is Adam Richard Sandler, Adam was born on the 9th September 1966 in the United States.

Adam Sandler first roles in acting were in Saturday Night Live, he went on to star in several Hollywood feature films that grossed over US$100 million at the box office.

Though he is best known for his roles as a comedian in the 1995 movie Billy Madison, in 1996 in the movie Happy Gilmore.

Adam Sandler had success in romantic movies such as The Wedding Singer in 1998.

In the early 2000s he had good roles in Punch-Drunk Love, Spanglish, and Reign Over Me.

In the year 2009 he appeared in a family movie called Bed Time Stories.

Help us improve this page:   Correct or update the Adam Sandler page